There are people with such breadth and depth of knowledge in a subject that it’s wise not to contradict them without good reason. For quality improvement that includes W. Edwards Deming: the American engineer, statistician and professor who is widely acknowledged as the father of modern quality improvement. The influence of different quality gurus comes and goes but Deming laid down the basics.

At the heart of Deming’s teachings is the plan, do, study, act (PDSA) cycle, which effectively applies scientific method to process improvement and, on reflection, is obvious. You have to plan improvements. Once you’ve done them, you study how they worked and then you act (adopt, amend or abandon them), and repeat.

But where do you start? The PDSA cycle begins with ‘plan’. Well yes, but what do you plan? You can’t produce a plan from nothing. Like going on a journey, you need know where you are and where you want to go before you can plan how to get there.

The answer is to start with study. PDSA is of course a cycle, so this doesn’t really contradict Deming’s writings. Deming did also outline a “0th stage of planning”, recognising that you don’t just launch into your plan. And his later writing increasingly stressed the importance of study rather than the ‘plan, do, check, act’ of his and fellow American physicist, engineer and statistician Walter A. Shewhart’s earlier work.

The PDSA cycle begins with ‘plan’. Well yes, but what do you plan? You can’t produce a plan from nothing.

Towards the scientific method

The study, decide, plan, do cycle aligns more closely with scientific method (observe, hypothesise, plan and conduct an experiment). It suits those studying a process or new subject, and anyone setting up or improving an organisation. It broadly aligns solving a mathematical problem as suggested by Hungarian mathematician George Pólya in 1945 (understand the problem, devise a plan, carry out the plan, look back). And it gives a good approach to tackling DIY and other projects. 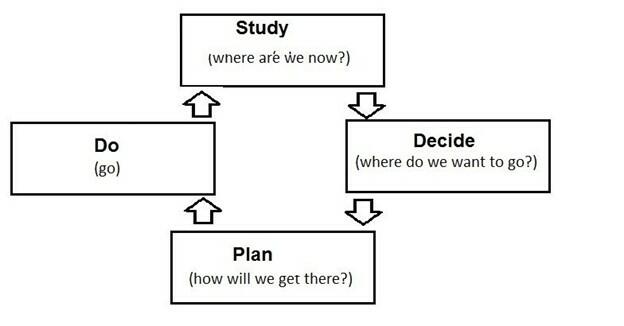 Studying tells you what people before you have observed, and in turn what to observe and what to look for. Moving study up front encourages a wider and deeper first look at your aims, operations, and the effects of your actions. It builds your model of the processes: where you are now.

Following your study, compare your model (system description) against what actually happens. You’ll normally see several options to improve. For organisations deciding between these improvement options, it should assess the real costs (including wider social and environmental costs) along with the benefits and savings for each of the improvements across each department. Otherwise, it will risk optimising the parts at the expense of the whole. (In subsequent passes round the cycle, this tells you whether you should adopt, amend or abandon any changes to the system.) It is then important that you agree your decision with others involved, plan and align your actions and do what you’ve planned.

Study needs to be structured, organising the key data you’ve collected, and updating your model as you go. Key ideas from the study of your subject (and related subjects) should be in front of you at each relevant stage of the cycle.

How well you study and how closely your model matches the world will likely determine how successful you’ll be. It’s the stage that sets your whole direction.